In Memory of
Virginia Genevieve
Knickelbein
1927 -
2021
Click above to light a memorial candle.
Menu
Send Flowers
Plant a Tree In Memory of Your Loved One
Click Here 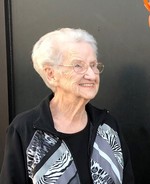 Virginia Genevieve (Stephansen) Knickelbein died on January 19, 2021 in Nashville, Tennessee at age 94. She was born January 3, 1927 to Eyvind and Gertrude Stephansen in Chicago, Illinois.

After graduating from Tuley High School in Chicago, Virginia met August Knickelbein at Margie’s Candy Shop and they were married on August 16, 1947. In the years that followed, they celebrated the birth of their three children: Karen in 1948, August S. in 1953, and David in 1959.

In addition to raising a family, Virginia worked in retail at her best friend’s clothing store, she also spent several years assisting in a physician’s office and working in the banking industry. Virginia was always an active member of her community, serving as a member of the church session at the Presbyterian Church of Berwyn for many years and serving as a member of the school board, PTA, Girl Scouts, and various school committees. During their retirement years, Virginia and August moved out west to build a mountain home in Truckee, California; they spent a number of years in Horseshoe Bend, Arkansas and eventually Virginia returned to Nashville after the passing of August. During her time in Nashville, Virginia enjoyed the company of her many friends at Harpeth Presbyterian Church and The Meadows, the senior community where she lived. But most of all, Virginia loved the time she could spend with her family during the get togethers with her children, grandchildren, and great grandchildren.

The family would like to extend their appreciation for the love and support they received in Virgina’s final days from Cornerstone Caregivers, Alive Hospice and Belmont Village Senior Living.