In Memory of
Richard Rowe
Clifton, Sr.
1935 - 2021
Click above to light a memorial candle.
Memorial Candle Tribute From
Williamson Memorial Funeral Home and Cremation Services
"We are honored to provide this Book of Memories to the family."
View full message >>>
Send Flowers
Plant a Tree In Memory of Your Loved One
Click Here
Menu 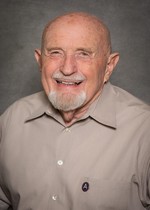 The Lord called a muster alert and Richard Rowe Clifton, Sr. reported present on January 20, 2021. The 85-year-old beloved husband, father, grandfather, great-grandfather, friend, and hero was surrounded by his family as he stepped to the arms of his Lord and savior.
Richard was both hard and kind, he valued family, God, country, and hard work. He loved his fellow man and was quietly benevolent. Strangers were few in Richard’s world as he spoke to all who crossed his path. His home was always open to wayward sons and daughters who needed a warm meal or a kick in the pants. He had one true love in his life, his wife, Ginger, whom he started dating 70 years ago. By example he taught his children and grandchildren to say what you mean and mean what you say. He also taught them the importance of big hugs, holding hands, and thanking God at the end of each day. He spent his work career with CNA Insurance, ultimately retiring as Vice President of Sales. He graduated from Bass High School in Atlanta GA and Georgia State University.
This GEN George Patton quote sums him up well, “If a man has done his best, what else is there?” And Richard’s personal motto: Life is good. Very, very, good. Amen.

The family will receive visitors beginning at 11:00 am on Sunday Feb. 14, 2021 at Williamson Memorial Funeral Home. A memorial service will begin 1:00 PM and will be offered online. If interested in attending the virtual memorial service through Zoom, please contact the family via email at: RichardRClifton@gmail.com for the Zoom link.

In lieu of flowers, donations may be made to WoundedWarriorProject.org in memory of CPT Richard R. Clifton, Sr.