In Memory of
Robert "Bob" "Pop"
Cholette
1933 - 2021
Click above to light a memorial candle.
Memorial Candle Tribute From
Williamson Memorial Funeral Home and Cremation Services
"We are honored to provide this Book of Memories to the family."
View full message >>>
Send Flowers
Plant a Tree In Memory of Your Loved One
Click Here
Menu 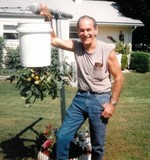 General Information: Loved his family and friends; Up until his health started failing, was very active, always busy doing things either for himself, family or a friend. Loved music and dancing; He just loved life itself and lived it to the best of his ability. Never met a stranger. He especially loved cooking for his family and was an avid league bowler for many years.

The family wishes to express our heartfelt gratitude and appreciation and a huge thank you to Dianann Shaw, Pop’s care giver and companion throughout the past 6 years. We want to also express our gratitude and appreciation to Pop’s longtime friend, Bobby Parnell for his role in taking care of our Dad. Without these 2 people, keeping our Dad home especially during his most difficult times would not have been possible. We also wish to express our sincere appreciation to the nurses and staff of Caris Health Care for their services and genuine care. SPECIAL THANKS to Dr. Jamie Slandzicki and his staff for their care and support for well over a decade and more importantly these last few months.