In Memory of
Peter "Pete"
Kelly
1961 - 2021
Click above to light a memorial candle.
Memorial Candle Tribute From
Williamson Memorial Funeral Home and Cremation Services
"We are honored to provide this Book of Memories to the family."
View full message >>>
Send Flowers
Plant a Tree In Memory of Your Loved One
Click Here
Menu 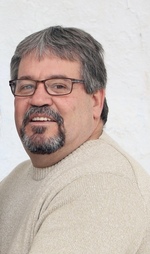 Peter “Pete” Kelly was born to John J. Kelly and Marie (Marx) Kelly on March 8, 1961 in Red Bank, New Jersey and departed this life on February 20, 2021 at Williamson Medical Center in Franklin, Tennessee surrounded by loved ones.
As the second oldest of the five children, growing up in Matawan, New Jersey, Pete always enjoyed the large family gatherings that also included his grandfathers, aunts, uncles and all of the cousins. He enjoyed reminiscing and sharing stories of his days playing baseball with his brothers and neighborhood friends. One of his favorite memories was when his grandfather would pay the ice cream truck to make a detour through their neighborhood and his buying ice cream for not only Pete, his three brothers and sister, but the whole neighborhood.
Pete moved to Liberal, Kansas with his family in 1977 where he attended Liberal High School. He later moved to Oklahoma where he began his career in the oilfield, lastly completing twenty-six years with Chaparral Energy, before retiring from the oilfield in 2020.
Pete and his beloved wife, Lori, moved to Spring Hill, Tennessee from Bartlesville, Oklahoma in June of 2020, where he began employment with a wonderful company, Stewart Builder Supply. Although his time with them was cut short, he made many friends within the company and enjoyed all of his co-workers.
Pete enjoyed outdoor activities, fishing, hunting and cooking, but his greatest joy was his family, whom he would do anything to help, making their lives easier. As far as his family was concerned, he could fix anything. He loved sharing stories and memories of his childhood or life’s experiences with his family, but he was best at telling anyone who would listen about his wonderful family.
Pete was preceded in death by his father and grandparents.
He is survived by his wife, Lori; mother, Marie Kelly of Perryton, TX; sons Pete Kelly, Jr & Rachelle of Bartlesville, OK and Daniel Kelly of Mounds, OK; daughters Lindsay & Kyle Williams of Spring Hill, TN and Chandra & Keden Shrum of Bedford, TX, sister Kathleen Kelly of Perryton, TX; brothers Jack & Grace Kelly of Surf Side Beach, SC; George & Kathy Kelly of Levittown, PA and Patrick & Jan Kelly of Bartlesville, OK.
“Paw Paw” and “Grandpa”, as he was affectionately called, was also loved and survived by grandchildren Rachel Kelly, London Kelly, Taylor Kelly, Lincoln Kelly, Ryleigh Baker, Kynlee Williams, Kaisley Williams and Ragan Shrum. Additionally, he was loved and survived by an aunt and uncle, many nieces, nephews and cousins as well as the many, many friends he made in his life’s journey.