In Memory of
Evelyn Inez
Anderson
1944 -
2021
Click above to light a memorial candle.
Menu
Send Flowers
Plant a Tree In Memory of Your Loved One
Click Here 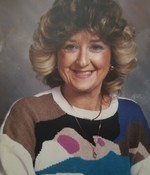 Evelyn was born in Franklin, TN to John ‘Sam’ Pewitt and Ollie Bell Howell Pewitt on January 8th, 1944. She grew up in Leipers Fork Tennessee where she attended Hillsboro High School. Evelyn spent most of her life residing in Franklin and Lewisburg TN. She was a devoted wife, mother, grandmother and friend to those close to her. She had a passion for shopping and decorating her home. She also had great love for animals especially her cats and peacocks she kept around her house.

Evelyn is preceded in death by her husband Joe E Anderson, her parents John and Ollie Pewitt, and her sister Ruthie “Pea” Sullivan.

Visitation will be 5PM Monday, March 1st with a service following at 6PM located at Williamson Memorial Funeral Home in Franklin, TN