In Memory of
James "Jim" D.
Grimes
1957 - 2021
Click above to light a memorial candle.
Memorial Candle Tribute From
Williamson Memorial Funeral Home and Cremation Services
"We are honored to provide this Book of Memories to the family."
View full message >>>
Send Flowers
Plant a Tree In Memory of Your Loved One
Click Here
Menu 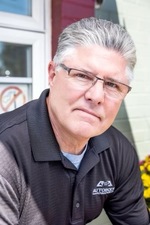 James “Jim” D. Grimes, age 63 of Lynnville, TN went home to be with his Lord and Savior on Monday, April 19, 2021. He was taken from us far too soon. He was a loving husband, father, grandfather, brother, uncle, friend, and community leader. He understood the true value of friendship. This was made evident, in part, by his lifelong friendships with a group known as the Land Sharks. He valued his family and made it a priority to keep in touch with his brothers at least on a weekly basis. He lived and left a legacy of character and faith. He worked hard, played hard and laughed hard. He was an avid Pittsburgh sports fan. The only thing he loved more than Steelers football was his family, friends, and the Lord. He was the owner and President of Auto Body Advantage. He had many ties to the community including serving on the board at The Well food pantry, Spring Hill Chamber of Commerce, Boys and Girls Club of Columbia and Pulaski, and various other charitable and civic organizations. Preceded in death by parents, Edward and Shirley (Balentine) Grimes. Survived by: loving wife, Dawn Grimes; daughter, Jessie Grimes; sons, Jon (Miranda) Grimes, Mike (Allison) Grimes and Tyler (Jillian) Jones; brothers, Larry (Lisa Pellegrino) Grimes, Bruce (Gelsomina) Grimes, Edward (Donna) Grimes and Rob (Patty) Grimes; grandchildren, Leo and Eli Jones; family friends, Uncle Geoff, Hector Morales, the Landsharks, and many other loving friends/family. A Celebration of Life Gathering will be held on Sunday, April 25, 2021 from 12:00 Noon until 4:00 PM at the Venue at Birchwood, 4749 Kedron Road, Spring Hill, TN 37174. All are encouraged to come in comfortable attire and to share fellowship with the family. In lieu of flowers, memorials may be made to The Boys and Girls Club of Columbia and Pulaski; The Well Food Pantry or Wounded Warrior Project. SPRING HILL MEMORIAL PARK AND FUNERAL HOME. 931 486-0059 www.springhill-memorial.com
Printable
Share on Facebook
Facebook Twitter
Tennessee Funeral Directors Association National Funeral Directors Association Cremation Association of North America Cemetery Association of Tennessee Franklin Breakfast Rotary Club Spring Hill Chamber of Commerce Williamson Chamber of Commerce
Locations
News & Events
Resources
Planning Ahead
Contact Us
Proudly Serving the Communities of Franklin, Spring Hill, Middle Tennessee and Nationwide.