In Memory of
Virginia "Jenny" Lee Perry
White
1927 -
2021
Click above to light a memorial candle.
Menu
Send Flowers
Plant a Tree In Memory of Your Loved One
Click Here 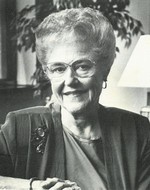 Virginia “Jenny” Lee Perry White, age 93 of Franklin, TN passed away May 4, 2021. She was born in Huntingdon, TN to the late J. Will & Ava Perry. Virginia retired after 40 years of service with NationsBank, formerly Williamson County Bank where she served as Senior Vice President. She was the first female president of the Williamson County Chamber of Commerce. She was a Past President of the National Association of Banking & Professional Women. Virginia was a former chairwoman of the Williamson County Tourism Committee, and a former member of the Board of Trustees of Columbia State Community College. She was very influential in bringing Columbia State to Williamson County. Virginia also was a part of bringing the Saturn Plant to Spring Hill as well. She was a beloved member of Fourth Avenue Church of Christ. She is preceded in death by her husband, James B. White; granddaughter, Jennifer Compton; sisters, Jodie Warlick & Sara Williams. Virginia is survived by her daughters, Mrs. Patrick (Pat) Springer of Thompsons Station, TN, Mrs. Dale (Amy) Pewitt of Franklin, TN and Mrs. Allen (Cindy) Gentry of Franklin, TN; sister, Billie Sue Holley of Atlanta, GA and many loving grandchildren & great-grandchildren. A funeral service will be held 2:00PM Friday, May 7, 2021 at Fourth Avenue Church of Christ, Albert Lemmons & Nancy Baughman will officiate. Burial will follow in Williamson Memorial Gardens. Active pallbearers will be Aaron Compton, Byron Pewitt, J. Will Pewitt, Jase Gentry, Jim Inman, Larry Inman, Perry Holley, Bill Holley, Jerry White and Kyle Williams. Memorials may be made to the Williamson County Rescue Squad, American Diabetes Association or the Shriners Hospital for Children. Visitation will be 5-8PM Thursday at Fourth Avenue Church of Christ and one hour prior to the service at the church. WILLIAMSON MEMORIAL FUNERAL HOME & CREMATION SERVICES, 615-794-2289. www.williamsonmemorial.com
Printable
Share on Facebook
Facebook Twitter
Tennessee Funeral Directors Association National Funeral Directors Association Cremation Association of North America Cemetery Association of Tennessee Franklin Breakfast Rotary Club Spring Hill Chamber of Commerce Williamson Chamber of Commerce
Locations
News & Events
Resources
Planning Ahead
Contact Us
Proudly Serving the Communities of Franklin, Spring Hill, Middle Tennessee and Nationwide.