In Memory of
Audrey J.
Foster
1929 -
2021
Click above to light a memorial candle.
Menu
Send Flowers
Plant a Tree In Memory of Your Loved One
Click Here 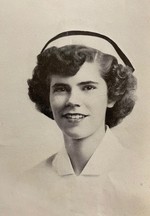 Audrey J. Foster, 91, of Franklin, TN, died on June 5, 2021 at NHC in Cool Springs, TN. The cause of death was complications from dementia, according to her family. Audrey Foster was a graduate of the Buffalo General Hospital School of Nursing in Buffalo, NY where she became a registered nurse. She worked at Buffalo General Hospital as an RN before marrying her husband of 54 years, Captain James R. Foster. Audrey then became a military wife and mother traveling all over the US and the world while raising five boys and supporting the many young families in her husband’s squadron. Family was the most important thing to Audrey and no matter where she and Jim were stationed if they could make it back to their hometown of Olean, NY with the boys then she prioritized it. As the mother of five boys Audrey could not wait for daughter in-laws and who all became a very important part of her life. Later in life and in retirement pool parties, Sunday dinners and holidays at Nana and Popeye’s were where memories were made, memories her children and grandchildren still talk about today.

Audrey was born on December 17, 1929, in Olean, New York to Janette Hubbard Nickel and Paul William Nickel. She was the oldest of three children. She married her high school sweetheart, James Richard Foster, in 1957. They had five sons. Audrey was preceded in death by her husband, Captain James R. Foster; her brothers, Howard Nickel and Richard (Dick) Nickel, sons, Mark Foster and John Foster, parents, Paul and Jane Nickel, sisters-in-law, Beverly (Bev) Nickel, Janet Foster Driscoll and Patricia A. Foster, and her brothers-in-law, Robert (Bob) Driscoll and Donald (Don) C. Foster. She is survived by her sons, James A. Foster, David Foster and Tom Foster, as well as their spouses Beth Foster, Shannon Foster and Julie Foster. In addition, she is survived by eight grandchildren; three great grandchildren; and sister-in-law, Francis Nickel; as well as many cousins, nieces, and nephews. The family will celebrate Audrey’s life 4:00 PM Tuesday, June 15, 2021 at Williamson Memorial Funeral Home in Franklin, TN with visitation one hour prior to the service. Audrey will be laid to rest with her late husband at the Georgia National Cemetery in Canton, GA. The family wishes to thank all the doctors, nurses and hospice workers who cared for Audrey during her illness and all the friends and extended family members for their prayers and support during her transition. Online condolences may be expressed at williamsonmemorial.com. In lieu of flowers the family asks that you consider a donation to the Dementia Society of America or your local Alzheimer’s and Dementia charity.
WILLIAMSON MEMORIAL FUNERAL HOME, 615 794-2289 williamsonmemorial.com