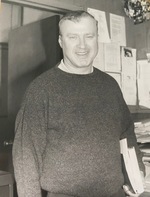 Michael Kevin Green, age 82, of Franklin, TN was called by the Lord peacefully in his sleep while at home with his wife Mary Jo and his daughter Susan’s family on Friday, July 16, 2021, the Feast of Our Lady of Mount Carmel.

Born September 7, 1938 in Washington, D.C. Michael was the 8th of 12 children in the family of the late Philip & Dolores Green. Michael attended the Catholic University Campus School and Mackin High School, both in Washington, D.C. before earning a Bachelors and Masters degree from the Catholic University of America, also in Washington, D.C. He served his country as a member of the U.S. Air Force from which he was honorably discharged in 1966. In a career marked by commitment to education, athletics, and service to the Church, Michael spent 36 years as a Catholic High School teacher, the last 33 at Archbishop John Carroll High School in DC. In addition to teaching, he served as the football announcer for many years, and coached multiple sports. A crowning achievement came when he coached the 1973 baseball team to a conference championship. His athletic resume also included time as a baseball umpire, during which he officiated at several marquee high school and college games, including Army vs. Navy.

Michael married the love of his life, Mary Josephine Carr Green, on October 13, 1962. Long time parishioners of Saint John the Evengelist Church in Silver Spring, MD, together they raised four children as faithful Roman Catholics, with Michael coaching each of the four children in at least one sport. In 2002, Michael was recognized for his many years of service to the parish with a “Commitment to Excellence” award. In retirement, Michael and Mary Jo spent several years in Bethany Beach, DE, before moving to Franklin, TN in 2016.

A graveside service will be held at 11:00 AM on Friday, July 23, 2021 at Calvary Cemetery, Nashville, TN.
Expressions of sympathy may take the form of donations to Radio Maria USA in loving memory of Michael Kevin Green. Donations can be made online at radiomaria.us, by calling 888-408-0201, or by check to Radio Maria USA, 601 Washington St. Alexandria, LA 71301